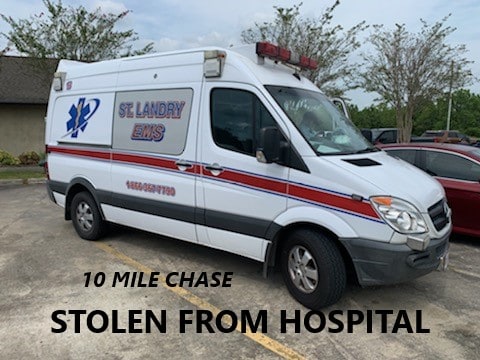 A 36-year-old Crowley man was arrested Wednesday after police say he stole a St. Landry Parish EMS ambulance sitting outside a Lafayette hospital and led law enforcement officials on a chase down I-10 to Acadia Parish.

Following his arrest, Kerry Cormier told police he took the van because his wait for treatment was taking too long.

Duson Police say they were alerted by St. Landry EMS that an ambulance equipped with a GPS tracker had been stolen from Ochsner Lafayette General and that the ambulance was headed westbound on I-10.

Police Chief Kip Judice said officers saw the ambulance traveling on I-10 and attempted to stop it, however the driver refused and a pursuit ensued for 10 miles to the East Crowley exit.

Judice said from the East Crowley exit, Cormier then drove to La. Hwy 1111 where he pulled into the parking lot of his Family Physicians clinic, circled the driveway and struck a car occupied by an 88-year-old Crowley man.

No injuries were reported, Judice said.

He then jumped out of the ambulance and ran into the clinic, Judice said.

It was inside the doctor’s office that he was taken into custody.

Judice said Cormier had been involved in a crash earlier Wednesday on Ambassador Caffery Parkway in Lafayette and taken by ambulance to a local hospital for injuries in his back and on his side.

“After waiting to be seen, Cormier stated he decided to go to a different hospital for quicker service and walked out of the Lafayette General ER and found an ambulance parked there. Cormier took this ambulance and proceeded to UHC in Lafayette where he was not immediately seen there either,” Judice said.

He then took the ambulance to go to his primary care physician in Crowley and on his way he stated the police started chasing him, Judice said.

Following his arrest, Cormier was transported to Acadia General Hospital in Crowley where doctors confirmed that Cormier had a rib fracture.

He was treated and released for incarceration, Judice said.