7/27/22 Henderson, KY – Man Steals Ambulance From Henderson Based Deaconess Hospital – Police Have The Suspect In Custody After Stealing And Escaping 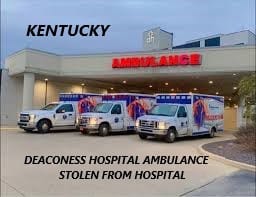 An Evansville man is arrested after being accused of stealing an ambulance.

According to police, officers were called to Deaconess Hospital in Henderson around 9:30 Tuesday night after the ambulance went missing.

Authorities were able to track the ambulance with the assistance of the Hopkins County Sheriff’s Department and Kentucky State Police.

Worman was located and arrested.

He’s currently being held in the Henderson County Detention Center.