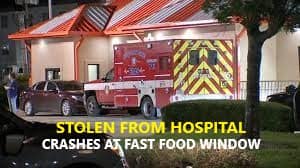 As first published by ABC13 in Houston, a driver crashed a stolen ambulance head-on into customers waiting in a Whataburger drive-thru.

Authorities have since determined that the ambulance was taken from the West Houston Medical Center.

The impacted Whataburger is located about a mile from Westheimer near Daisy Ashford.

Witnesses told ABC13 that at first, it appeared that the ambulance was simply heading over to help someone.

No injuries were reported in the crash.

Employees at the Whataburger said upon crashing, the man went inside and started running around the kitchen.

Police said the suspect has since been taken into custody.