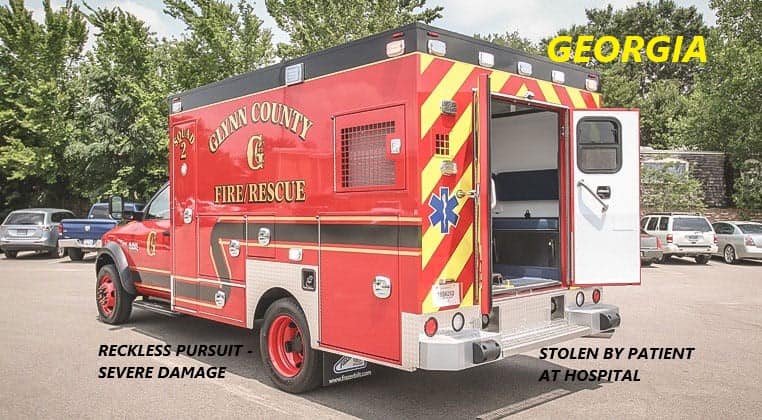 After being transported to Southeast Georgia Health System’s Brunswick hospital by a Glynn County Fire-Rescue ambulance crew before dawn Monday, authorities say a man promptly jumped behind the wheel of the vehicle that transported him and sped away.

Brunswick police say the 20-year-old alleged ambulance thief proceeded to lead law enforcement on a reckless pursuit through three counties before he was apprehended in Liberty County, according to reports.

Vantwan Rhameke Rowe of Brunswick was returned to Glynn County, where he was arrested by hospital police. Rowe remained Monday in the Glynn County Detention Center, charged with entering an automobile with intent to steal, felony theft, interference with government property, willful interference with emergency medical professionals and fleeing to elude the law. Bond is set at more than $600,000 for the felony theft charge, jail records show.

The ambulance incurred significant damage in the pursuit, which ended when the vehicle ran off the road at U.S. 17 near Interstate 95 in Liberty County, said Glynn County spokeswoman Katie Baasen.

It all started when a county fire-rescue ambulance crew transported Rowe to the hospital at 2415 Parkwood Drive in Brunswick at about 1:53 a.m. Monday, according to a Brunswick Police report. At the loading zone outside the emergency room, Rowe allegedly got out of the ambulance and scrambled around outside the vehicle.

Rowe allegedly then got into the cab of the ambulance from the passenger’s side door, slid behind the wheel of the vehicle and drove away, police reported.

According to Brunswick police, “it was discovered the male began to run around the unloading zone at the hospital, eventually gaining access in the ambulance by opening the passenger door.”

The pursuit spilled over into McIntosh County, where McIntosh County deputies took the lead in the pursuit. Glynn County police continued to follow as “observers only,” Robinson said.

Several motorists had to cede the southbound lane of U.S. 17 in McIntosh County to avoid collision when Rowe allegedly pulled into the oncoming lane, Lowe said. Liberty County Sheriff’s Office deputies joined the pursuit when Lowe entered that county.

McIntosh County deputies put down more spike sticks on U.S. 17 at this point, Lowe said. Rowe allegedly drove the ambulance off the road at U.S. 17 and I-95, just north of the county line, after which he jumped from the vehicle and ran, Lowe said. Glynn County police then apprehended him at a nearby service station, Lowe said.

“He was trying to get to the interstate when he ran off the road,” Lowe said. “He ran across the street to a Sunoco station, and that’s where Glynn County police got him.”