05/26/19 Buffalo, NY – Fire Chief’s Battalion Tahoe With Lights Flashing Stolen From Fire Call – Man Crashed Into A Camaro In A Driveway – Appeared To Be Intoxicated Behind The Wheel – Arrested 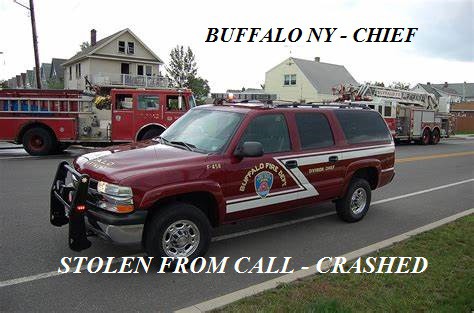 A Buffalo man is accused of stealing a Buffalo fire chief’s battalion vehicle as firefighters responded early Saturday to an emergency call at the Buffalo Grand Hotel.

The Chevy Tahoe – painted bright red with markings indicating it is a Buffalo fire truck – was parked unlocked at 120 Church St. and running with its overhead lights flashing when Jakyle E. Foster, 23, allegedly took it for a ride.

Buffalo police caught Foster in the 200 block of Virginia Street, about eight minutes later. Officers found him parked in a driveway, where he had hit a 2001 Chevrolet Camaro also parked there. Foster appeared to be intoxicated, police said.

The incident happened around 3:30 a.m. as firefighters responded to a sprinkler malfunction in the hotel that caused an estimated $120,000 in damage to the building and contents.