07/8/19 Fresno, CA – Man Steals American Ambulance While On Emergency Medical Call – Police Saw This Man Steal The Ambulance And Followed – Other Police Vehicle Arrived And Assisted In Stopping The Ambulance From The Highway – Arrested 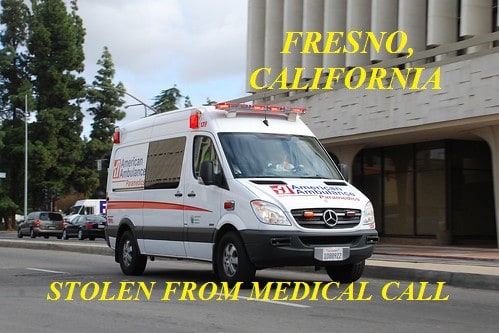 A 26-year-old man was arrested after police say he stole an ambulance while on the scene of a medical emergency.

It happened Sunday around 9:40 p.m. in the area of East Lamona Ave in Fresno.

According to Fresno Police, an American Ambulance crew was dispatched to an address on Lamona Ave for a medical emergency.

The first responders parked the ambulance but left the keys inside after activating a secured parking mechanism, police say.

Police say shortly after the first responders went into the house, a man identified as 26-year-old Gilberto Martinez of Reedley knocked on the front door asking to use the phone. When he was denied, he walked to the parked ambulance and started pulling on the door handles.

A Fresno Police officer was in the area and was able to follow behind the stolen ambulance until additional units arrived to help.

Police say Martinez saw police officers behind him and exited the highway at Clovis Ave. He then pulled the ambulance over and followed all directions given to him by officers.

Police say as Martinez was getting arrested, Martinez said he took the ambulance because the devil made him do it, and he was trying to get back to Reedley to see his wife and child.

Martinez was booked in the Fresno County Jail for stealing an emergency vehicle.