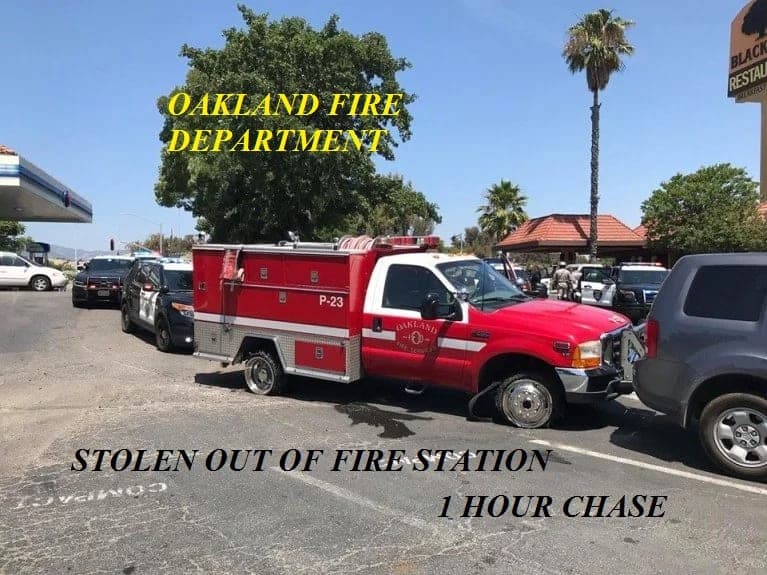 A man stole an Oakland fire truck Saturday and led police officers on a wild chase through three counties, before finally being arrested near Vacaville.

Around 10:44 a.m. Saturday, a good Samaritan called the police, after noticing a man who did not look like a fire department employee milling around an East Oakland fire station while the crew was out at another emergency, said Oakland Fire Department Deputy Chief Nick Luby.

The man climbed into a wild lands truck, which Luby said the department uses to douse fires in area that larger fire trucks can’t access, and made it out of Fire Station 23, located near the intersection of Foothill and MacArthur boulevards. ,

“We call it a patrol truck,” he said. “It’s small and can go on fire trails.”

Early dispatch reports indicated California Highway Patrol officers chased the truck through Alameda, Contra Costa and Solano counties, following the truck from Highway 24 onto Interstate 680 and Interstate 80 before it exited onto Interstate 505.

CHP officers ultimately used spike strips to slow the vehicle, which stopped near Vacaville, Luby said. Officers arrested the driver at 11:45 a.m., according to Oakland police. The man’s name has not yet been released.

There was no damage to the truck other than tire damage, Luby said. There was some damage to the doorway of the station’s garage, which Luby said likely occurred when the truck was driven out. No injuries were reported.

“It ended as well as could have hoped considering the situation,” he said.

It’s still not clear, however, how the man made it into the fire station. Luby said that normally, fire stations are locked when the crew leaves.

The truck keys are kept in the vehicle, though, which Luby says enables the department to respond more quickly to emergencies.

To his knowledge, Luby said, it’s the first time in 20 years working for the department that a truck has been stolen.