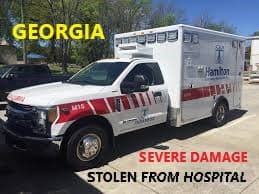 A man didn’t get far after taking an ambulance from Hamilton Medical Center early Friday morning, according to a police incident report.

John Williams, 57, no address listed, was charged Friday by the Dalton Police Department with felony theft of an automobile and hit and run. Williams remained in the Whitfield County jail Friday afternoon.

“As we turned onto Chattanooga Road from Shugart Road, we saw the ambulance stopped by the Whitfield County Sheriff’s Office at the liquor store across from the (RaceTrac) gas station. Whitfield County deputies had already gotten the driver out of the vehicle and handcuffed by the time we pulled into the parking lot,” the report said.

One officer took Williams to the jail, while others went to the hospital.

“The ambulance had just transported a patient to the Emergency Department at Hamilton Medical Center and was unoccupied at the time of theft,” said Scott Radeker, director of Hamilton Emergency Medical Services. “While the unit was damaged, no medication or equipment was stolen.”

“Response times for emergency medical services were not and will not be impacted by this incident,” said Radeker. “A backup ambulance was immediately placed in service, and there was no decrease in the provision of 911 coverage. During the time it takes to repair or replace the damaged ambulance, the backup unit will be used. Hamilton EMS maintains backup ambulances to be utilized whenever front-line units require maintenance or repair. Hamilton EMS wishes to thank the Whitfield County E911 dispatchers and the Whitfield County Sheriff’s Office for their quick and professional response.”