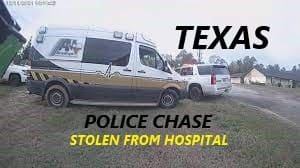 Lufkin police arrested a man who led officers on a chase in a private ambulance he stole from outside a local hospital emergency room Saturday morning.

Draylon Lewis, 19, of Lufkin, was taken into custody at 8:14 a.m. in front of Eastview Pentecostal Church on Loop 287. The chase ended in a muddy field in front of the church after an officer used a pursuit intervention technique maneuver.

Officers began looking for the stolen Acadian ambulance around 7:55 a.m. after Lewis took it from CHI St. Luke’s Health Memorial Lufkin emergency room. Acadian emergency workers were inside the hospital and there was no patient on board at the time.

Dispatch was able to relay the ambulance’s location to officers via a tracking device monitored in real-time by Acadian staff.

Lewis left the hospital parking lot and turned onto Ellis Avenue and from there turned left on Frank Avenue and right on Loop 287 northbound.

Officers caught up to Lawis near the intersection of Webber Street around 8:03 a.m. and Lewis turned into the church parking lot to avoid being spiked by officers staged on the highway. The lead pursuit officer feared Lewis would drive into the officer who was waiting with spikes.

Law enforcement then conducted a high-risk traffic stop on the ambulance and took Lewis into custody.

The top speeds during the chase were between 70 to 80 miles per hour. The police Tahoe and ambulance only had minor damage and both vehicles remained drivable.

Lewis is charged with unauthorized use of a motor vehicle and evading arrest.