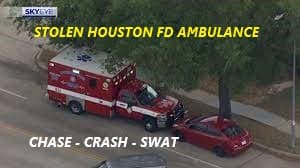 So, what was the reason that police gave for Gisentaner’s time in the hospital? On Monday night, officers were forced to run after a man who they say tried to burglarize a house. Police were able to take down the suspect, who complained of an injury during the incident and was taken to the hospital.

After an overnight stay, Gisentaner then got into it with an officer assigned to him in custody, police said. This confrontation stemmed from the suspect becoming agitated when he requested to use the bathroom but was given a bedpan.

Gisentaner ran from police for the second time in just several hours, this time throughout the hospital.

The suspect made it outside the building, where first responders were unloading a patient from an ambulance, and he hopped in and took off, according to police.

Memorial Hermann addressed the chase within its walls, with a spokesperson confirming that there has been no active security threat at the campus and no individuals harmed during the incident.

The hospital could not offer specific details about the incident due to patient privacy laws.