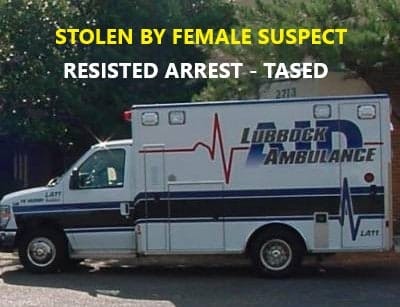 Lubbock and Levelland police pursued and stopped the vehicle with help from Texas DPS and the Hockley County Sheriff’s Office.

We’re told this was a Lubbock AID ambulance that was taken from Lubbock, but there was no crew inside. The call came in from 19th and Upland around 3 p.m.

A viewer submitted this video of law enforcement stopping the ambulance on Highway 114 and Alamo Road. The driver was taken into custody.

Texas DPS says one of their troopers got ahead of ambulance and laid down spike strips in front of it. DPS says the driver who stole the vehicle stopped when she saw the spikes. She resisted arrest and was stunned by a taser from the trooper before she was taken to the Hockley County Jail.

27-year-old Leanne Carol Gray is charged with unauthorized use of a vehicle and evading arrest in a vehicle.

We’ll update this story as more details are released. Lubbock AID Ambulance released this statement on Saturday evening: “We want to thank law enforcement for a successful apprehension on one of our stolen vehicles. We are thankful no one was injured and that none of our crew members or patients, were on board during this unfortunate event.”