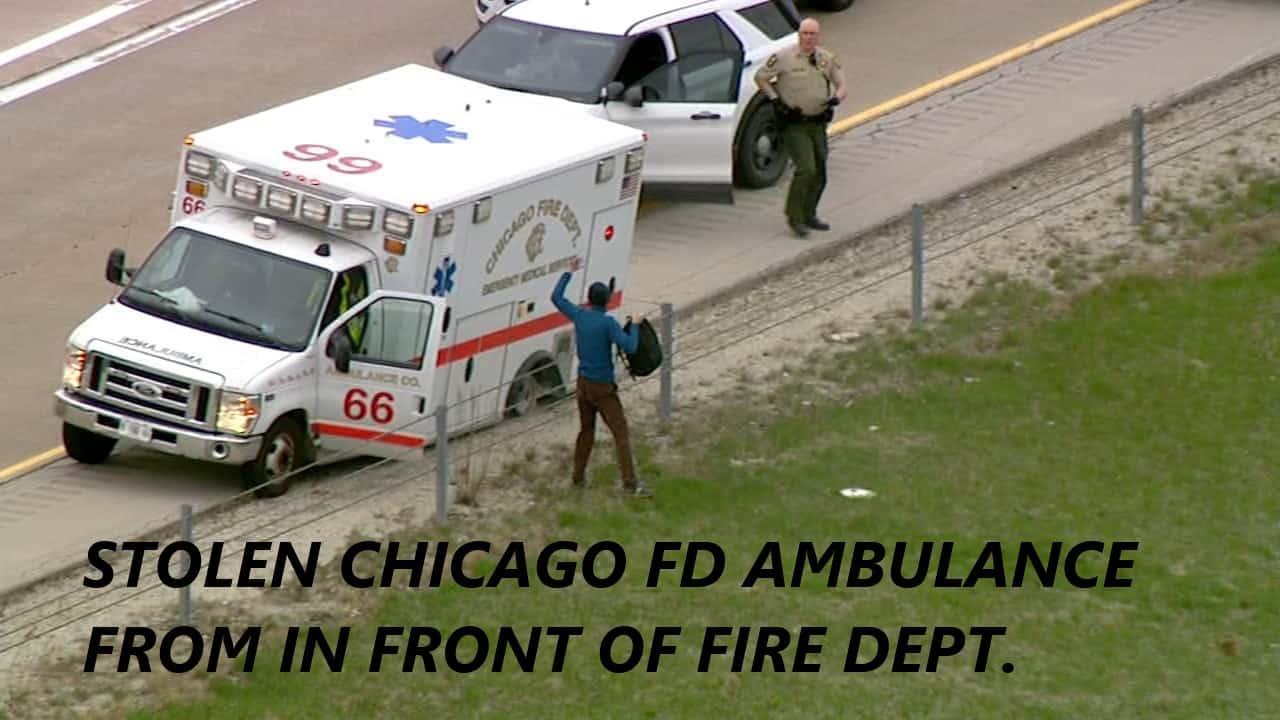 A man is charged for leading police on a nearly 80-mile chase throughout the Chicago area Monday in a stolen ambulance.

Benjamin K. Herrington, 46, of Chicago, was charged with fleeing to elude a peace officer, resisting or obstructing a peace officer and possession of a stolen motor vehicle in connection with Monday’s chase, Illinois State Police said Tuesday morning.

“He has terrible mental health problems,” his mother told ABC7 over the phone.

His mother said her son was trying to make it south to her, but wouldn’t elaborate on what prompted her son to take off in an official city emergency vehicle.

Minutes before police say Herrington took the ambulance, and Amtrak spokesperson said he jumped off one of their trains headed toward Carbondale at Halsted Street.

Police said at about 4:40 p.m. Monday a Chicago Fire Department ambulance was parked in the 200-block of West Cermak Road in Chinatown. Police said it was taken while it was parked and unattended on the street in front of the firehouse. Surveillance video captured it all.

During the theft, a bystander stopped and did a double take as the driver pulled off. Officials said no one was in the ambulance when it was stolen.

Herrington fled south in ambulance No. 66 onto the Stevenson Expressway, with first Chicago police and eventually officers from several other departments including Illinois State Police in pursuit, and eventually onto I-55 heading south into the southwest suburbs.

Over the course of the nearly two-hour ride, Herrington ranted over the ambulance’s radio about drugs, the FBI, and talked about a meeting at the Dirksen Federal Building.

After nearly two hours, the ambulance had made it nearly 80 miles southwest of the city, near Dwight, where Herrington slowed to a stop and got out.

Garrett Tiehes was nearby, and managed to catch the events that followed on video.

“I’m just cruising right along, minding my own business, and I look over to my left on the southbound lane because I see about 15 cop cars. No clue what’s going on; I thought it was an accident,” he recalled. “I see a man take off in the grass and I’m like, ‘Oh my god, there’s a guy fleeing the scene.'”

It briefly looked like he was going to surrender; he stepped over a fence divider between the highway and the grass median with a backpack and got onto his knees. There appeared to be an exchange of words with police and Herrington suddenly grabbed his backpack and took off on foot, running into the northbound lanes of I-55.

“I couldn’t believe what was going on. I couldn’t wrap my mind around what he did because I thought it was just a car accident,” said Tiehes.

There he stopped a red truck hauling a trailer and attempted to get in the passenger door, but was unable to. He was then tackled by several officers and a K-9 unit and taken into custody on the side of the highway near the Streator-Kankakee exit.

Herrington was eventually taken away in an ambulance and could be seen on video arriving at Morris Hospital in Grundy County for non-life threatening injuries.

He was released from the hospital about 2 a.m., and taken to the Grundy County Jail, Illinois State Police said, where he remains, waiting for a Wednesday court appearance.

In a statement, the Chicago Fire Department said:

“We wish to thank the Chicago Police Department, Illinois State Police, and supporting suburban departments for their professionalism and patience in recovering CFD ambulance 66.

“These officers were able to secure the ambulance and get the young man the help he needs without serious injury to himself or members of the public.

“CFD immediately started an internal investigation into how this incident started and we will take the necessary steps to prevent futures occurrences of this type.”