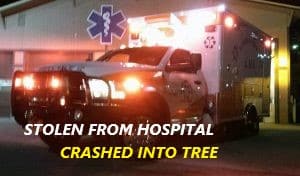 A man is facing several charges after he reportedly stole and crashed an ambulance from a hospital.

Court records state that 33-year-old Dustin Poolaw of Ruidoso reportedly stole the ambulance Monday afternoon while it was parked at the Lincoln County Medical Center’s emergency entrance. The ambulance, which belonged to Mescalero Apache Tribe, was unlocked at the time.

Poolaw had been taken to the medical center that day after police responded to a call at Two Rivers Park where Poolaw was allegedly intoxicated and causing other issues with people.

He then allegedly stole the ambulance after he was released from the hospital at about 4 p.m.

According to court documents, the ambulance was found crashed into a tree and abandoned less than a mile from the hospital at the intersection of Galvin Canyon and Meander Drives.

Poolaw was found just after 7 p.m. when police received calls of a man walking in the roadway while appearing to be intoxicated and waving a gun.

He was then arrested. Police allegedly found the ambulance keys on Poolaw when he was taken into custody.

He was also given a citation for disorderly conduct for walking on Highway 70.

Court records indicate that bond was set for Poolaw at $5,000.