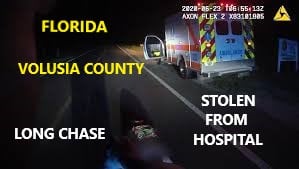 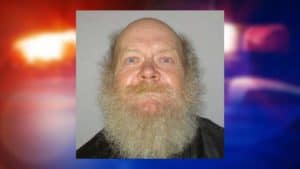 A Florida man is behind bars after the Flagler County Sheriff’s Office said he stole an ambulance that was idling outside of a hospital and led law enforcement on a multi-county chase.

The Daytona Beach Police Department received a call just after 2:30 a.m. Tuesday in reference to a stolen vehicle at AdventHealth located at 301 Memorial Medical Parkway. An EMT at the hospital told police she and her other crew members were inside the hospital working on a patient when a man entered the ambulance that was sitting empty outside, a report showed. She told officers that the front doors of the ambulance were locked, but the back doors were left unlocked as they wheeled a patient into the hospital.

Another crew member told police that prior to the theft, a man later identified as Keith Peacock asked him for a ride in the ambulance, but told him no because they were in the middle of treating a patient, according to a report.

Both the Volusia and Flagler County Sheriff’s Offices were notified of the theft as Peacock headed westbound on State Road 40, just past Hunter’s Ridge.

Flagler deputies were eventually able to catch up with the ambulance, which was traveling at a high rate of speed, along State Road 11 in Bunnell where they pulled Peacock over as a felony traffic stop.

Volusia deputies were also involved in the pursuit, which they captured on video with dashboard cameras. That video can be viewed below, but VCSO has recommended view discretion in viewing the video due to strong language.

“Overnight, deputies responded to a report of a Volusia County ambulance that was stolen from AdventHealth Daytona Beach. With Central Communications able to track the ambulance and give updates on its location, Deputy Cowger spotted it traveling at a high speed on S.R. 11 in Bunnell, where he conducted a traffic stop and took the driver into custody,” VCSO officials wrote in a Facebook post.