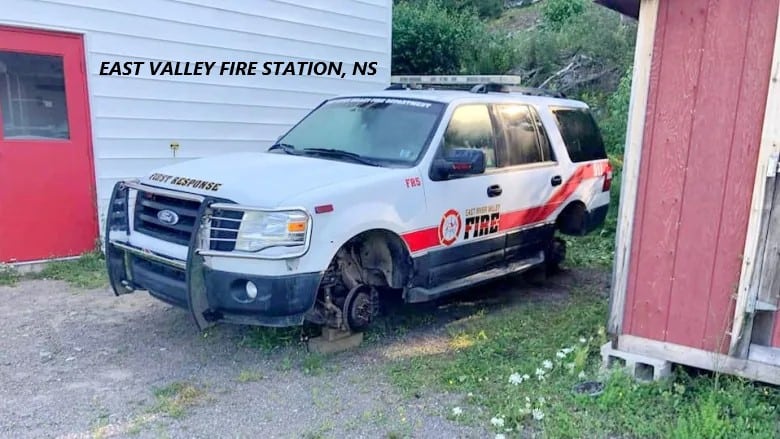 The brazen theft of four tires from an emergency vehicle parked outside a fire hall in Nova Scotia’s Pictou County comes with more than a financial cost for the department.

“I hope it’s not someone from our community, but if it is, it’s very disheartening,” MacIntyre said Wednesday afternoon.

“We have a really good group of firefighters who are dedicated. And, you know, it hits every one of us. We’re all thinking the exact same thing, like who or why? So if it’s someone in our community, that makes it that much worse.”

MacIntyre got a call about the tire theft Wednesday morning after a firefighter spotted the department’s emergency SUV without tires and jacked up on blocks outside the fire hall near New Glasgow.

The deputy chief described the SUV as a vital piece of equipment used for medical calls, which the department responds to far more often than fires. It’s also used for mutual aid with other departments, or blocking off the road after a traffic collision.

Having the vehicle out of commission for the day meant the department would have to use a larger fire truck, cutting down on the capacity to help the community.

The stolen set ran about $250 per tire, MacIntyre said. The department was planning to replace the full set, plus rims, by the end of day Wednesday, which he said would likely cost more than $2,000.

The unforeseen expense meant the department would have to dip into money being saved for a new tanker. Luckily, it seems as though the fire hall will be able to make the money back quickly.

MacIntyre said he’s gotten dozens of calls and messages from people across the province offering to organize a fundraiser, make financial donations — even offering rims and tires of their own.

Nova Scotia RCMP said Wednesday they are investigating the theft.

Cpl. Chris Marshall, a spokesperson for the force, said the last time the tires were seen on the 2010 Ford Expedition was around 9:45 p.m. Tuesday. They are a set of 265-70R17 BFGoodrich all-terrain tires with black rims.

Anyone with information on the tires is asked to call Pictou RCMP or submit a tip to Crime Stoppers.

Meanwhile, MacIntyre has a message for whoever stole the tires.

“If it was them that needed us today, tomorrow or the next day, we would still respond,” MacIntyre said.

“Even though they’ve done this to the fire department, we would still help them if they needed it. That’s the type of people we have on our department.”