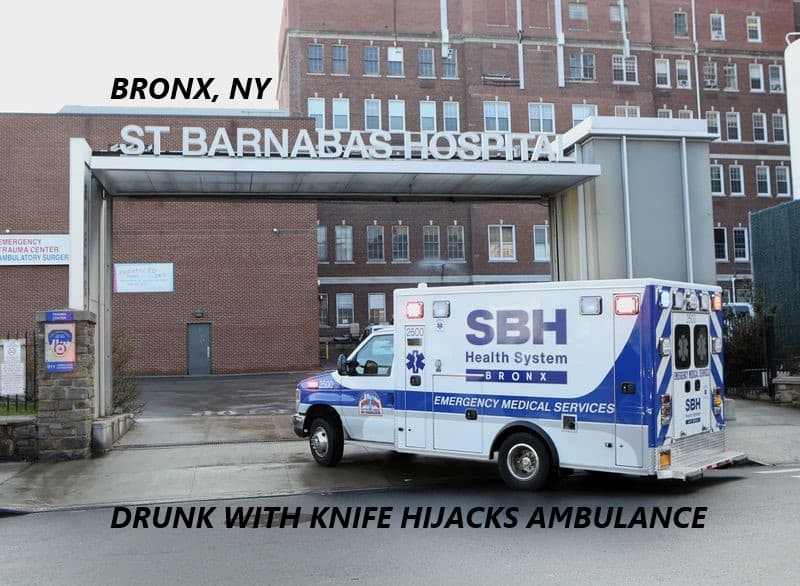 A knife-wielding drunken man attacked a pair of EMTs driving him to a Bronx hospital early Monday — and briefly hijacked their ambulance, officials said.

Daniel Corby, 26, was being transported by two EMTs to St. Barnabas Hospital when he went berserk about 4 a.m., authorities said. Corby allegedly unbuckled himself, pulled a knife and threatened the hardworking first responders.

The driver of the ambulance slammed on the brakes and pulled over just outside the Bronx Zoo on E. Fordham Road near Southern Blvd.

Corby struggled with the two men and briefly took control of the wheel, driving off with the shocked EMTs still inside, officials said.

“It just happened super quick, and my first reaction was to help my partner,” said one of the EMTs, who did not want to give his name.

The EMTs fought back and got control of the vehicle, and Corby was arrested a short time later. One of the EMTs was bitten on the hand, scratched and punched struggling with Corby, according to authorities.

Corby, who lives in Canarsie, Brooklyn, was charged with robbery and possession of a knife.

“I also got Yadira Arroyo flashbacks from that,” the unnamed EMT said.

The EMT was referring to the murder of Arroyo, a veteran EMT for FDNY EMS, who was run over and killed in March 2017 by Jose Gonzalez, a mentally unbalanced man trying to steal her ambulance.