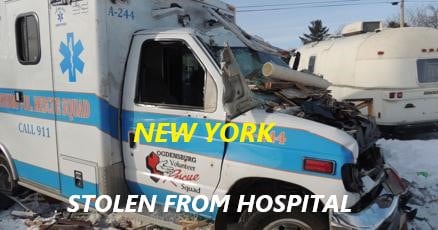 A Hannawa Falls man is facing charges after he stole an ambulance at Claxton-Hepburn Medical Center and eventually crashed it into a Ogdensburg home’s garage Monday afternoon.

In a news release Monday night, city police stated that they were called to assist with a combative subject in the emergency room at 3:17 p.m. While responding, the subject, Yengi R. Lado, 25, Hannawa Falls, stole an ambulance belonging to the Ogdensburg Volunteer Rescue Squad that was parked outside the Emergency Room and fled the hospital.

“He stole an ambulance, left down Mansion Ave. southbound at a high rate of speed and he went through a garage at the intersection of Cedar and Mansion,” said Police Chief Mark T. Kearns.

Chief Kearns said that both the garage and ambulance sustained significant damage.

After the crash, Mr. Lado fled the scene and entered a tractor trailer cab before being taken into custody on State Highway 37 in Ogdensburg and brought back to CHMC for evaluation, according to city police.

Charges against Mr. Lado are pending.

City police were assisted by sheriff’s deputies and state police.

Rescue Squad Chief of Emergency Services Kenneth J. Gardner said that they were still gathering information on the incident and he did not have a comment at this time.