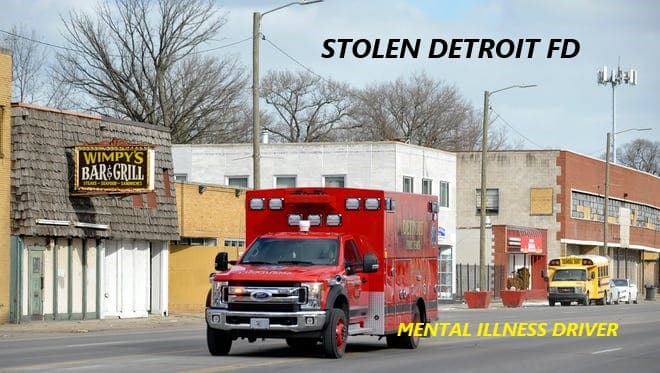 A 29-year-old Detroit man has been arrested for allegedly stealing a Detroit Fire Department ambulance Wednesday on the city’s west side, Michigan State Police said.

Detroit police notified state police at about 11:15 p.m. Wednesday that they were tracking a stolen ambulance as it entered the Lodge Freeway.

Officers and troopers located the vehicle in the area of Monica and Santa Clara near West McNichols and Livernois. The vehicle was occupied by one person, a male.

Police took him into custody without incident, authorities said.

They said troopers tried to get the man to give him his name and find out why he was in the ambulance, but he was incoherent and could not provide them with the information.

Troopers used a portable fingerprint scanner to identify the man and then learned the man has a history of mental illness.

The suspect was turned over to Detroit police and the ambulance was returned to the Detroit Fire Department, according to authorities.