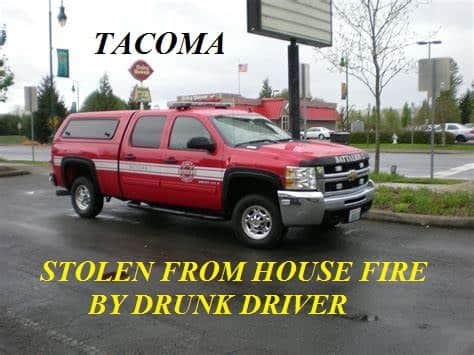 A Tacoma Fire Department truck was stolen as firefighters battled a stubborn blaze in the city’s Hilltop neighborhood Tuesday night.

The truck, a pickup driven by a safety officer for Battalion 2 was taken in the 1200 block of Ridgewood street around 11:45 p.m., about 20 minutes after crews were called to the scene.

“The safety officer noticed that his apparatus, the rig that he responded with, was missing,” said Tacoma Deputy Fire Chief Mike Mitchell.
Crews even asked the woman renting the home that was burning if she had seen anyone get into the truck.

“The fire chief told me that the car had been stolen and asked me if I’d seen anything. And I hadn’t ” said Kelly Dutton.

The safety officer made a radio call tried to see if another firefighter had moved the truck. He got a response from someone pretending to be a firefighter but Mitchell says he quickly knew the voice was not someone in the fire department.

“We don’t talk like that on the radio,” said Mitchell. “So the incident commander, wisely, recognized that.”

Police and firefighters tracked the vehicle’s GPS to North 21st Street and North Pearl, several miles away from where the suspect was stopped and taken into custody just a few minutes later. Clinton Scott,37, was booked on suspicion of motor vehicle theft, drug possession and drunk driving.

Mitchell said while some may find humor in the incident, no one at the department thinks it’s funny that needed equipment was stolen as crews fought a dangerous fire.

“Active emergency and to steal that vehicle I would say is a very serious offense,” he said.