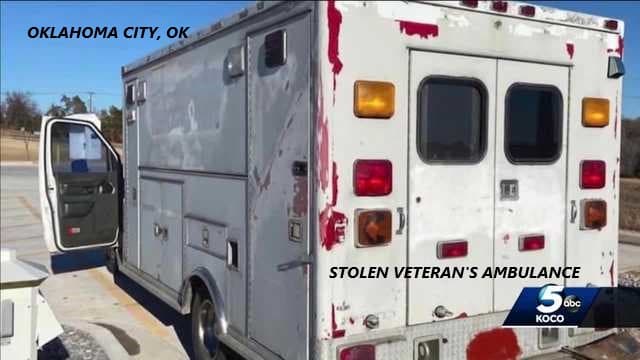 An Oklahoma nonprofit for homeless veterans had its ambulance stolen.

An ambulance was donated to a nonprofit to benefit homeless veterans but was stolen less than a week later.

“Kind of frustrating, kind of disappointing that people would do something like that,” said Kelly Hall, the president of Homeless Military Veterans.

Hall had big hopes for this donated ambulance.

“We loaded it up with hygiene packages, sleeping bags. There were jackets and basically whenever it got cold, the people that couldn’t make it to the warming shelter, we were going to come in and help those stay warm,” Hall said.

The ambulance was sitting in their soon-to-be headquarters over the weekend. When Kelly showed up on Sunday, the ambulance was no longer sitting there and there is no video of it being stolen because there is currently no security camera.

“The cameras are actually being installed today. Yesterday, AT&T came out and hooked up the Wi-Fi for the cameras,” Hall said.

Hall was unable to even make a police report because they didn’t have the title or bill of sale yet.

“We couldn’t make a police report because all we have right now is the donation receipt that the gentleman gave us,” Hall said.

For now, the organization will have to put this idea on hold.

“I guess we have to start over and purchase another one,” Hall said.