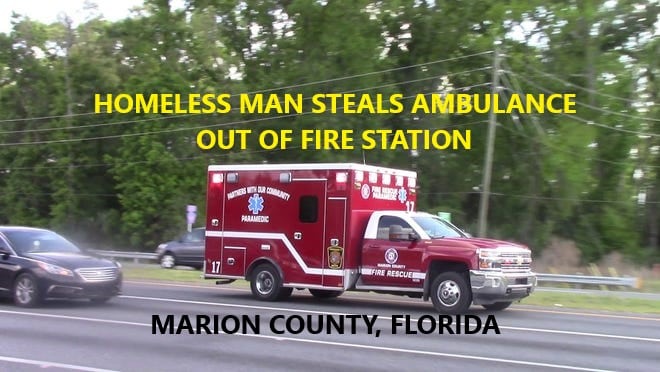 Marion County Sheriff’s Office deputies have arrested a man and accused him of stealing an unoccupied ambulance from an Ocala substation.

The man told deputies a woman at a grocery store told him that if he did not steal a motor vehicle – and get caught doing so – then someone would burn down his father’s residence.

The man, age 27, is homeless. Because of the circumstances of the case, his name is being withheld.

What happened on Monday

The man told deputies that, after receiving this directive from the woman, he walked around Ocala on Monday looking for an unlocked vehicle.

He said he saw the ambulance at the substation at 700 NW First Ave., Ocala, and took it. Law enforcement officials said the ambulance had been left unlocked, with the keys on top of the center console.

Two Marion County Fire Rescue EMS personnel assigned to the vehicle were inside the substation and did not immediately know the ambulance had been driven away.

Once they realized what had happened, they called law enforcement and their supervisors, according to an arrest report.

Sheriff’s deputies were able to monitor the vehicle, which has a tracking device, and stopped it at Northeast Jacksonville Road and County Road 326. That’s about 5 miles away from the substation.

The man, who listed his address as homeless, said he once worked for the City of Ocala’s fleet management division and was familiar with ambulances, patrol vehicles, fire trucks and SWAT vehicles, according to the arrest report.

The man was booked into the Marion County Jail with bail set at $5,000. His next court appearance is set for November.

Court documents indicate the man has several driving while license is suspended or revoked convictions, along with other driving infractions.